With 33 new projects currently planned or under construction it is clear that the West Loop is now the hottest area in Chicago. The West Loop (60607) neighborhood has just dipped below Wicker Park/Bucktown (60622 zip code) in lowest number of days on market for all listing types compared also to Lincoln Park and Old Town.

Not only are homes flying off the shelves, average sales price is more than what the sellers are even asking.

For sometime it has been apparent that change was destined for the once industrial area. And while the long term vision began during the 1980’s, it is not until the most recent years that the explosion of real estate deals has occurred. Currently the new hub for fashion and arts in the city of Chicago, the landscape of the West Loop has been drastically changing as the projects become more and more lucrative. With the June debut of Google’s new Chicago headquarters and the release of the official plan for McDonald’s headquarters relocation in the West Loop where Oprah Winfrey’s studio once stood, the neighborhood has become a hot topic of businesses throughout the real estate world. The West Loop is now being envisioned as the potentially new epicenter for world-famous restaurants and chic new offices for the world’s most influential companies; and it is clear that many more changes are on their way. 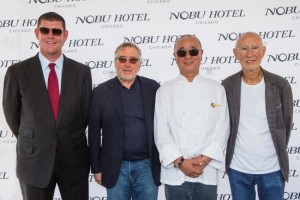 With the likes of the ritzy Ace and Nobu hotels, as well as the opening of the creative contemporary Soho House in the red-hot area, it is clear that things will never be the same. Hopping on the trend train, the globally expanding London-based Hoxton has also chosen to make its US debut in Chicago’s West Loop in the Fulton Market District. With expansions also planned for Paris and New York, the boutique hotel has picked the West Loop location as well as Williamsburg Brooklyn to spearhead their North American invasion. A surprising addition includes the New York-based company Equinox, who runs an extremely popular fitness chain and has plans for the West Loop to be one of two locations of the brand’s first hotel venture.

It is also important to note the construction boom for apartments and condos being built in the neighborhood; after all Chicago’s hot rental market has been a driving force behind the latest development boom. Among the major developments, high end luxury condos like  20 N Loomis remain as a testament of investor’s confidence in the ever increasing value of the hot West Loop neighborhood. These four bedroom and four bathroom units currently hold an asking price ranging from $2.2 to $2.5 million a piece. And it remains no surprise that plans for luxury apartments and condos intrinsically bring a type building to the West Loop that has never before been seen, Skyscrapers.

Never before have Skyscrapers been a part of the 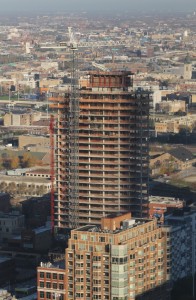 West Loop Skyline and with projects both proposed as well as planned for construction, the former warehouse and industrial district is set to get its first major facelift yet. This explosion in the West Loop remains on pace to change the city of Chicago forever and it would be a severe understatement to say that it is a good time to be an investor or developer in Chicago’s Hottest Neighborhood.